23 February 2017: James Watiti reflects on the progress to date of the CABI members of the SILT project team

The great thing about the SILT project is that we have a partnership that means we can do much more than we could achieve individually. At the heart of the project is a series of scale-up campaigns to help farming households to understand improved legume technologies.

The important thing about scale-up campaigns is that we reach scale but how do we do this and achieve value for money – that is our challenge!

We have been working on two crops common bean and soybean. In each case a suite of printed materials was developed using the ASHC participatory write-shop approach. These varied in style and content. Our research approach is to build up a profile of which combinations work effectively with different gender groups – especially women and younger farmers and the context in which they work.

The print materials were leaflets, posters and flashcards (these are illustrations taken from the poster for use in training sessions). 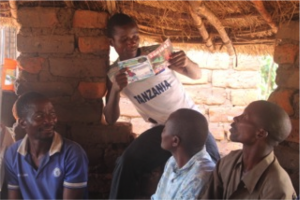 Whilst not every copy of the comic will reach a farming household we know that those that do are shared and read by as many as 10 other people.  The comic story reconnecting with some farmers who saw the comic we produced last season to help them overcome the barriers they faced and build on the successes.

The Shujaaz comic is also supported by a lively social media platform.  Last time we worked with Shujaaz there were lots of technical questions emerging – so this time we ensured that there was an extension specialist to post timely answers.

Within the experimental design of the soybean campaigns there supporting two different approaches to farmer demos which we are supporting with printed materials.

AFAP run large scale demos on acre plots. These are often in prominent sites – but the main focus of the teaching and learning happens just ahead of the harvest time.  These farmer training days are organised with the support of local farmer’s groups and the extension service. In the case of the common bean campaigns these events varied markedly in terms of attendance by women – although they did seem to attract large numbers of younger farmers. We need to understand more about why these variations occurred and specifically what happened in recruitment terms in the events that proved to be more inclusive of women. 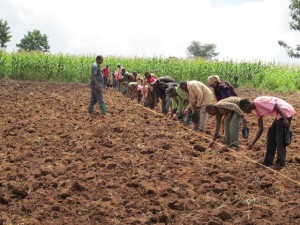 The second approach is an on-farm trial using small packs championed by Farm Input Promotions –Africa (FIPS-Africa). This season’s experiment will focus on Songea and Wanging’Ombe in the Southern Highlands. This intervention exemplifies the value of partnership working.

FIPS-Africa is very keen to ensure access to inputs for farmers. Indeed, there have been challenges in terms of the availability of inputs throughout the SILT project. The relationship with the Agricultural Seed Agency has been designed to help overcome the challenge of improved legume seed. FIPS-Africa has been working on an extensive project of on farm demos. Larger ‘mother’ demonstration plots are on land managed by the village-based advisor. After training, farmers develop their own baby demos. We are expecting over 2,000 of these to be planted.

There are several models for bulking up and distributing seed, including informal seed systems. Whilst much of the legume seed planted is bought as grain or obtained outside of the regulated system, there is an approach that offers some safeguards and can deliver improved seed. One approach is called Quality Declared Seed. It involves farmers being trained and supported to produce seed for sale to their neighbours – currently the regulations state within the ward in which the seed was grown.

We also have a experiment running to three different promotional approaches being piloted with 1,500 farmers in each cohort. One group of advisors will be distributing print only to promote improved legume technologies. The second group will be distributing print and circulating small packs of seed and inoculant for on-farm experimentation. The final group adds radio listening groups to print and sample pack.  The radio listening groups are weekly discussion group that are stimulated by the radio content commissioned by SILT.

We will be tracking these 4,500 farmers to see if the different approaches made any difference to changes in attitudes or behaviours to the legume technologies.

The first report from FIPS documenting the experiment is due in March 2017. However, the late arrival of the rains means that the planting season was delayed by 6-8 weeks and we are now expecting this report in May. The more interesting results will come next season when we can revisit the areas to see what has happened on the farms we targeted and to see any spill over of changes in approach on surrounding farms.

The partnership with AFAP has meant that we have been able to get materials into the heart of our target areas to support the training activity they have been promoting. One significant change that is happening in the soybean demo plot training, which did not occur in common bean campaign, is the systematic recording of the contact details of the people attending the training.  This will mean that effective impact evaluation can be carried out in future. 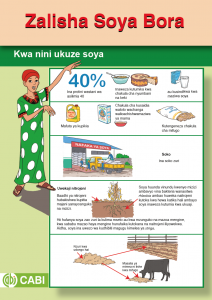 Large-scale printing has significant cost implications.  The create clear instructions for farmers full-colour printing really helps and seems to be preferred by target audiences.  Because of our unique funding arrangement with the Bill & Melinda Gates Foundation we have been able to apply funds from the Africa Soil Health Consortium, supporting a major push by N2Africa to use legumes to regenerate soil.

The research will help us to establish the cost effectiveness of the different combinations of media and approaches.