7 April 2017: The SILT delivery team shares work from FIPs-Africa to create over 2,000 on farm soybean demos in Tanzania:

Using the FIPS network of village-based advisors, the project demonstrated improved soybean technologies, using Mother-Baby approach. This approach facilitates farmer learning from the demonstration site – ‘mother’ and trialing on their own plots –‘baby’. Comparison is then made on performance of ‘mother and baby’ plots to assess level of learning and adaptation of trained technologies by farmers. 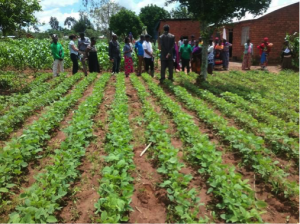 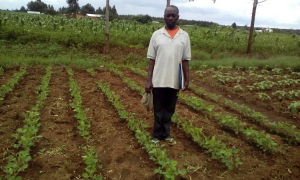 During 2016/2017 growing season, FIPS conducted 30 mother plots (30 villages) and up to 2,163 farmers established baby plots in Wangingombe and Songea districts, Tanzania. At least 50% of the persons practically involved in the demonstrations were women. This approach targeted both farmers in groups as well as individuals, which helped achieve scale of reach with ISFM information.

Further, FIPS organized 10 radio listening groups further reaching an additional 250 farmers. The listening groups were trained by FRI.These are groups of neighbours who sit together to listen to the weekly radio program. This works in two ways – first it stimulates debate which helps farmer to engage more with the programs. Secondly the moderators of the groups feedback on any areas of confusions – these are then addressed in subsequent broadcasts. These groups also received ASHC printed information materials demonstrating soybean ISFM practices – use of quality seed, use of Rhizobia inoculum, good agronomic practices, post-harvest handling and marketing.