ASA in Tanzania: Seeds of success

Legumes are a staple part of the Tanzanian diet – and almost everyone with a piece of land will grow them.  So, you might expect that legume seed sales would be an important part of the income of agro-dealers and seed merchants. But, in reality, this is not the case. To date there has been very limited investment in the supply chains for legume seeds. This is because of the perception that farmers are reluctant to pay the premium for seed – indeed they often buy and plant grain. There is also a mismatch between the varieties farmers really want and those that have government approval. But, finally, traders know that the seeds farmers buy will be saved and replanted year on year and swapped with neighbours – so the perception has been that the markets are not profitable.  So very little supply of improved seed for legumes like common bean and soybean has been put into the market, meaning that even farmers who are keen to buy seed are unlikely to get their hands on it!

The SILT project has taken demand predictions for seed and built up a campaign approach even ahead of supply issues being addressed. As enquiry levels rise in the agro-dealers networks, confidence grows and they see seed could be a profitable addition to the agro-dealers business – especially if other inputs are also bought like P fertilizer and in the case of soybean, inoculant.

Investment from SILT has helped us to start to make changes in the supply of seed. Unpredictable rainfall had an impact on seed production. Heavy rainfall in season one led into eruption of diseases that affected production of common beans especially for the first year.  The introduction of a more systematic treatment and spraying regime helped safeguard the crop. But last season over 80 tonnes of common bean seed was produced. 20 tonnes of this was delivered to agro-dealers in Bashnet, Mbulu, Hydom, Katesh, Karatu, Siha, Hai, Same and Arumeru, the rest were delivered directly to farmers and other companies. The project target was to deliver 5 tonnes of seed. 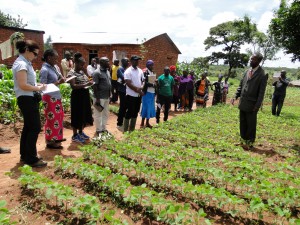 Radio Stata FM joined the training program in Njombe and developed a radio program that is aired in the region. This helped to transfer knowledge to a larger number of farmers and supplemented the radio produced by Farm Radio International and her partners.

85 lead farmers were trained in the best agronomic practices for soybean and common beans. Each of these farmers is tasked to train at least 10 other farmers as a way of helping SILT to reach scale, in this case using word of mouth.

We held a very successful farmer field day conducted at the ASA Arusha Seed Farm last June. This attracted over 300 farmers, 8 extension officers, 20 seed companies/agro-dealers from around the Northern Highlands. We were also joined by researchers from from Seliani Agricultural Research Institute. There was a strong media presence including TBC, Star TV, ITV, Habari leo and the Daily News.

There is still a lot to be done.

ASA has increased production of both soybean and common beans to meet the demand of seeds.  We have started producing common beans at our  Mbozi seed farm. 9 tonnes of common bean basic seed has been delivered to one of contract growers at the Mbozi Green Company ltd to further support the expansion of seed production in Mbozi. We have also engaged contact growers from Clinton Foundation farms in Dabaga to increase production of soybean seed.

The promotional work is also continuing 200 kg of common beans seed will mean we can have 5 acres of demonstration plots in Mbozi District. Whilst we continue our efforts to recruit as many agrodealers as possible to ensure a reliable supply of legume seed is available to the farmers.