27 June 2017: Martin Macharia OFRA data manager set out the challenge of the current fertilizer optimization tool or FOT that led them to develop a phone-based application.“The OFRA fertilizer optimization tool is a great way of supporting farmers. However, when we have been training extension staff we have encountered a number of challenges. First, extension workers often do not have access to computers in the field. When they have computers they often do not have an up-to-date Microsoft Excel versions to run the optimization tool. Even the extension staff that have access to computers complain that are bulky to carry in the field and run out of power in the field faster than mobile phones. We needed to find a way to overcome these practical challenges.”

The solution was to turn the computer version of the fertilizer optimization tool into an application, or app, that can be downloaded from Google Play store for android devices such as a smart phone or a tablet.

CABI successfully applied to the Global Challenges Research Fund (GCRF) for funding to develop the phone app version of the optimization tool.

Tim Beale from the Plantwise Knowledge Bank team at CABI head office is overseeing the development of the app,  working closely with the project partners in Africa.

Tim said: “The process of turning the Excel spreadsheets into a phone app requires us to take the tools for the 66 agro-ecological zones in 13 countries, so that they work on mobile phones as a download. This is important because it means that people do not need access to the internet to be able to use the app. Perhaps the most exciting aspect of the development work is that we have been able to make the phone app take account of integrated soil fertility management practices, that have been applied to the soil. So, if farmers are planting cereal after nitrogen-fixing legumes, or adding manure or other organic matter the app will also take this into account. This feature is currently not programmed into the computer-based FOT, where these adjustments are made using look-up tables” 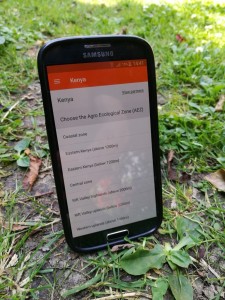 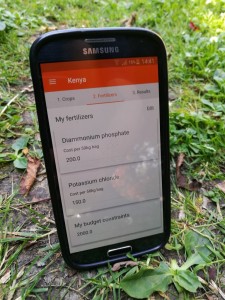 Oxford-based White October is the development company charged with producing the app.  They have already worked with CABI to develop the Factsheets Library app for the award-winning Plantwise Knowledge Bank

Tim continues: “The app is designed to be operated by an advisor, this is likely to be an agro-dealer or extension worker. There will be one app covering all 13 countries. By selecting a particular country the the agro-ecological zones that are covered by the app will be shown. After selecting the zone the next question is what crops does the farmer what to plant and what area is available to plant. Some 32 crops or cropping systems have been developed covering nearly all of the staples in the participating countries.  The farmers are then asked to suggest what they think a realistic farm gate price is for the crops they produce will be and the cost of the fertilizers that are available locally. From this the app can then make fertilizer recommendation based on profit maximization based on how much the farmer has to invest.”

The app will give a calculation for an expected return on investment and make suggestions for the most profitable breakdown of crops given the funds and land available. The farmer can then be sent an SMS to remind them of the recommendation that was created. If the app does not come up with a recommendation that meets the farmers needs they can go back and change any of the variables to better reflect their farming objectives.

One of the key issues is the fertilizer available locally. Fertilizer companies are experimenting with new blends all the time. So, the app can be programmed to include any new fertilizer that is developed.

Martin concludes: “Getting farmers to think of profit as the basis of their investment decisions is a big shift away from the old blanket fertilizer recommendations.  The way that the optimization approach works best is in one-to-one situations, with farmers making decisions about what they want to grow. With the massive increase in the availability of smart phones, having the optimization tool as an app will make a massive difference to the roll out of this technology. We have estimated that some 50 million families could be benefit from the fertilizer optimization approach. We should not rest until we have in place a series of options for getting this information to the farm gate.”

The development and scientific lead for the OFRA project is the University of Nebraska-Lincoln, they have generously allowed the algorithm they developed, to be used to create the new app.  The research and development leading to the development of 66 fertilizer optimization tools in 13 countries was funded by AGRA.

The app is expected to be ready for testing in early August 2017. 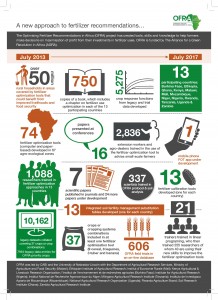