2 March 2017: The SILT partners in Tanzania are hosting Wendy Manchur and Jemimah Njuki from the projects funder IDRC. After spending a day reviewing the project in Dar Es Salaam the team is now visiting a number of different partners and visiting farmers to see the impact of SILT to date. This trip is designed to give IDRC a clear insight into progress SILT is making in the dissemination of legume technology information at scale and the improvements that have been made to support greater farmer access to seed and inoculant.

Today the project starts in Mbeya with a courtesy visit to the district council. The team will then visit farmers in nearby Mapogolo village to see the soybean demonstration plots. A second meeting with farmers will then take place at Ng’onde village. 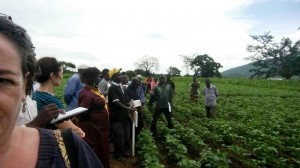 Tomorrow, after a courtesy call to see the director of Makambako Town Council the team will visit Usetule village. Here they will meet with farmers, extension officers, agronomist, an Agricultural Seed Agency representative and a seed inspector to review the work on producing quality declared seed. The team will also visit a nearby farmer who has adopted the agronomic practices at his own farm. The next stop will be a visit to agro-dealers.

Finally, the group will be drop in a group of farmers who meet as a radio listening group. This group is facilitated by a FIPS-Africa village-based advisor. These groups are helping to build local markets for improved soybean seed next season to support the village based advisors who have a half acre soybean crop in the field specifically to produce quality declared seed.

To coincide with the visit the partners have produced blogs:

The right wave length: 70,000 radio interactions in Tanzania (28 February 2017 blog) Farm Radio International reflects on the level of interactivity in the radio programs in the legume campaigns in Tanzania