The Legume Alliance contacted Shujaaz to see if we could make bean farming ‘cool’ again! This was no easy challenge. Our recent national survey showed that young Tanzanian’s are far from embracing the opportunities available to them in agriculture: “When you tell us to go do agriculture it is like someone has insulted you and you can even take them to court!” (female field test participant)

Young Tanzanians grow up surrounded by negative stereotypes about agriculture. Everything young people hear and see points to agriculture as a sector of small and unsure earnings but big and sure humiliations. 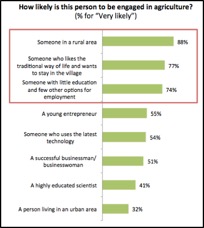 However, we at Shujaaz love a challenge and we were confident that with the input and enthusiasm of the Legume Alliance team, we could provide an angle that would engage the Shujaaz audience and challenge some of these negative preconceived ideas.

Everything we do at Shujaaz is informed by in-depth research which enables us to craft the persuasion strategies that sit in our media. We have been using a mixture of engaging fictional stories and positive, role-model case-studies, featuring young agri-prenures who are excelling in their field and being endorsed by their family and friends for making something of their lives. We used this approach for the Legume Alliance campaign.

The overall objective was to promote common bean farming to millions of youth across the country as a simple and productive agri-hustle. The campaigns were also designed to explore the impact of multiple sources of agricultural information on family decision-making dynamics as well as to changes in attitudes and behaviour.

The campaign was designed to:

•  Explore how and why young people & beans are a good fit

•  Challenge myths around gender stereotypes – why should men grow a woman’s crop?

Shujaaz is a multi-media youth platform that engages young people in good ideas that can improve their lives. The Shujaaz story is told in 500,000 nationally distributed comics every month and in a national weekly radio show. The comic & radio are designed to generate a large scale conversation on the Shujaaz social media pages & SMS platform. This conversation in turn provides a wealth on feedback and insights on the topics being discussed.

The Shujaaz media platform uses fictional characters to drive the narrative across the media. Shujaaz means heroes. However, these heroes don’t rely on superpowers like conventional comic book heroes – they are aspirational, authentic and inspiring role models for youjng people across Tanzania. First amongst these is DJ T – a young guy who has left school and can’t afford to go on to tertiary education. But he has a vision – he wants to reach out to other youth like him across the country and to share good ideas that will improve their lives. To do this he has built a secret pirate radio station in his bedroom! His fans tune into the show across the country to hear the great ideas his listeners share and then discuss them on the Shujaaz social media platforms.

After discussing bean farming on the radio show, DJ T then posted on his facebook page: “When I asked youguys to share your favorite childhood food, most of you mentioned beans. My question is what’s the deal with beans why is it such a popular food?”

The replies to this post were many and varied such as:

•  It’s the money one can make through beans, that’s why I love them.

•  People should stop being such hypocrites, beans are a staple food in Tanzania, I doubt if there is anyone who has never eaten beans. It doesn’t matter what your economic status is.

•  They are high in proteins and delicious, so why not.

DJ Tee, research shows that beans are quite nutritious and it also says they are better than meat.

Our monitoring and evaluating team are now analyzing the thousands of comments we had on the campaign and will soon submit a final report to the Legume Alliance team with our insights, findings and recommendations.

To see more of the feedback the Shujaaz Legume Alliance campaign generated, read this short report: