Veronica Victorice of Mtegowa Simba village in Tanzania has a different relationship with her father now – and it is all thanks to a comic.

As part of the its innovation communication pilot projects, ASHC commissioned two stories in Shujaaz, a graphically illustrated comic produced by Well Told Story. 600,000 comics are distributed every month in Kenya. ASHC wanted to explore if the same approach could work where the Shujaaz brand does not have a following. So, this experiment looked at how young people could be used as a conduit for integrated soil fertility management innovations using a comic story. ASHC worked in partnership with Farm Input Promotions-Africa (FIPS-Africa) to produce an 8-page single story comic. The story was translated into Kiswahili. FIPS-Africa had acted as technical consultants when the story was first developed, so the advice in the comic was consistent with their approach. 16,000 smallholder farming families were targeted and the 40 FIPS-Africa advisors in Morogoro rural district helped with the distribution. The story features a young woman and her grandmother reviewing the options for planting maize (see bottom of page 3). They looked at different approaches attempted by their neighbours and decided to apply three approaches – improved seed, fertilizer and manure. They discovered ISFM from first principles.

But did it work?…

FIPS-Africa returned to the villages when the harvests were in and talked to the young people about the impact the comic had had on their families. Here access to information was key to challenging gender stereotypes – as a woman and a young person Veronica previously had no voice in the farm. But then things changed… Veronica’s day starts early in the morning, doing household chores, cleaning the compound and leaving for the farm to weed, cultivate or harvest, depending on the season. She said: “The hardest part of my day is working in the farm but it has lately become interesting because my dad and I engage in discussions freely unlike before when he would wait to instruct me. The comic created a platform for discussions on maize farming.”

In the past Veronica saw her father as rigid and hard to engage with on important issues. But now they sit down and brainstorm on how to improve production, with Veronica leading the conversation, using the Malkia story from the comic. Her father had seen the comic and asked his daughter to read it for him so he could understand the messages. “When I looked at the book I noticed it was a story. My father liked the illustration but the fonts in the book were too small for my dad to read so he made me the teacher. We had three conversations just discussing Malkia and I loved these discussions. I also had an opportunity to discuss my career with dad. He is really keen to ensure that I progress to university.” Having to weed less will certainly provide more time for Veronica to study. 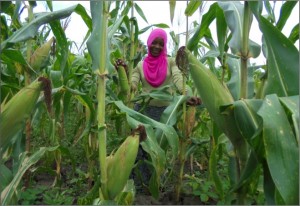 As the two shared and compared the modern and traditional ways of planting, a special bond was building between father and daughter. Veronica explains: “Dad argued that there was no need to use fertilizer on our farms but manure. I made him understand that it was necessary because soils get depleted every season we plant.” Veronica remembers her dad’s position on manure application before the comic. He believed in broadcasting manure when planting to enrich the whole plot with nutrients. This had a big impact on Veronica’s workload: “Because of this we could weed three to four times a season while other farmers weed twice a few weeks after planting and when maize is knee high. There is page where the characters are arguing over what improved yields. It brought out the message so clearly that my dad and I easily understood the need for a combination of good practices,such as spacing, use of improved seed and, planting one seed per hole, as the core requirements for a good harvest.”

Last season they planted the DK8053 variety using the 25 cm x 75 cm spacing, as taught by the FIPS-Africa advisor. They did not broadcast farmyard manure as before but followed instructions from the comic to micro-dose it. “My dad and I decided to combine the three things for better yields. We harvested seven bags from the quarter acre of land. We used to harvest five bags from the same plot. The comic has helped me bond with my dad. I love the fact that we implemented things from the comic and they worked.”

Start of a special relationship

Today, Veronica and her father enjoy a special relationship built from every minute they sat down reading the comic together, grasping the message and applying it on their plot of land. The teenager is happy that the comic was able to demystify her dad who she had for a very long time mistaken to be uncaring.

“After reading the comic I bought the 2 kg of DK8053 for two reasons:one was that I had tried the seed on a 5 metre x 5 metre plot and liked its performance and another because my daughter would help me refer to the comic as we implemented new things” says Msise. 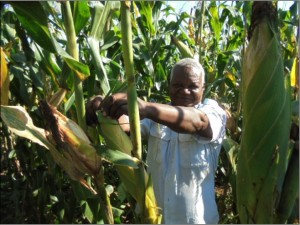 Veronica has also been spreading the word. Seven of her young friends shared the comic so their neighbours also received these messages.

Rob Burnet from Shujaaz commented: “A dedicated Tanzanian version of Shujaaz launches in September 2014 with seed money from The Bill & Melinda Gates Foundation. Half a million copies of the 32 page comic book will be distributed free around the country every month,accompanied by FM radio, social media and SMS, aiming to reach and inspire millions more young people to change their lives through agriculture,like Veronica.”

A schools poster competition has shown that Kenyan young people really understand what farmers need to be successful. “It is often thought that young people don’t take an interest in agriculture. This competition shows, that with a combination of exciting lessons and incentives, young Kenyans quickly pick up the basics of smart farming. It also […]

1 December 2012 As part of the World Soil Day celebrations in Kenya, ASHC is publishing an integrated soil fertility management story in the December issue of Shujaaz. 600,000 comics will be distributed in Kenya showing the benefits of using improved seed, organic matter and fertilizer Shujaaz means hero. On the cover of Shujaaz Chapta […]