Duncan Sones, from the CABI GALA communications team, reflects on the first two years of the soybean campaign in Northern Ghana.

In the last two years, there have been 346 village-based film screenings of films made by CABI to show farmers how to grow soybean. Take into account the use of Facebook for a music-based video campaign, and an estimated 128,000 members of farming families in the North of Ghana have received information on soybean farming from the campaign work we have been delivering, with our partners, in the region.

CABI is experimenting with a campaigns-based approach, developed in the region as part of a project called Gender and the Legume Alliance (GALA). A campaign is developed from a situational analysis in the country. This seeks to match the information needs of farmers with what the media partners can deliver in the locality. Whilst farmers’ media preferences play a part in the process, we also look for innovations in media or formats that we feel will be hard hitting with the target audience. The preferences need interpretation. We know, for example, that farmers talk a lot about the importance of seeing for themselves. They usually cite demonstration plots, but we found a different way to meet their needs in Ghana.

In most cases, we are looking for some cross-media collaboration that reaches every member of the farming family. In Ghana, the campaign centered on film, viral music videos and village-based screening. Whilst other media were used, including posters, leaflets and SMS, these were developed to support the core messages shared through the films.

The village-based film screenings are an approach developed in Northern Ghana by Countrywise Communications . A three-wheeled motor-cycle with trailer is dispatched to a pre-selected village and an outdoor film screening is set up. All of the equipment needed for the screening is delivered by on the motor-cycle by a screening officer, who also acts as master of ceremonies at the event.

GALA is a research project so we wanted to explore how the learning and knowledge of the communities could potentially change as result of the exposure to the film screenings. Would they come to the screenings? Would they find this approach useful? And would it lead to any changes in knowledge, attitudes or behaviour? We also wondered if gender was a determinant in the decision-making process of participating to film screenings.

The GALA team experimented different formats of films that were shown to farmers.

A short film showing the highlight of the different formats used in the media campaign these included news bulletins, music videos and training films

At 348 village-based screenings, nearly 83,000 members of farming families have seen our films. This includes over 30,000 school-aged children. 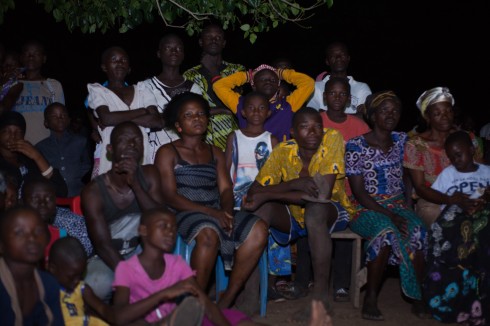 Richard Musebe, from the CABI research team, carried out a series of focus groups in late 2018, in the area where the village-based film screenings had taken place.

He reported that farmers felt that the films had positively influenced their practices, resulting in improvements in the way that they farmed, harvested and processed soybean.

In particular, farmers declared to have learned the importance of sorting good seeds from bad seeds, row planting, and recommended spacing. Farmers mentioned to have heard for the first time about the use of inoculants through the video.

Among the benefit of implementing the recommended practices, farmers mentioned the increase of yields.

The comments from farmers largely related to practices that require no inputs. Accessing credit to buy inputs or having access to the inputs recommended in the films remains a challenge. In particular farmers commented that they had only seen inoculant in the film screenings.  There is considerable work to do to make access to farm inputs supported by affordable credit schemes.

Audience reactions to the film How to grow more soybeans…

CABI is currently analyzing research data from telephone interviews with famers growing soybean and will soon be able to report on the impact the screenings had on awareness and adoption.

The option of ‘narrowcasting’- screening within the village – can be customized to meet the information needs and daily schedule of the local community.  Women find it easy to attend screenings because they are very local, child-friendly and take place after all their household and farming chores and religious commitments have been observed.

The village-based screenings, in many places, attract more women than men. This does not happen at other events, such as farmer groups, field schools or extension meetings where for pragmatic reasons women find it hard to attend. 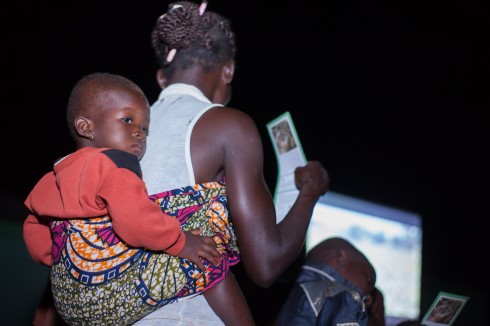 The fact that the whole family learns together is also of interest to policy makers because, by facilitating a change in access to information across gender groups, a change in on-farm discussions and household decision-making process may happen. It is also likely that, given the whole household has been sensitized together, the quality of adoption of technologies will be improved because everyone understands the technology equally.

One other significant difference about film screenings is the impact that they have on young people. AgDevCo, a social impact investor and project developer working in the African agriculture sector, has highlighted that new technologies, such as village-based screenings, can help draw younger people into agriculture, helping to alleviate concerns about the aging farmer population in many countries.

The 200 CABI screenings in 2018 also included a short film on fall army-worm detection, protection and management. This shows the flexibility of the screenings. Once they are set up it is possible to bring together a number of different films which appeal to the farmers. One of the screening officers told us: “We know very quickly from the reaction of the audience if they like the film, and think it is useful. If they are quiet and the children are told to be quiet it means that they film is seen to be useful.  It seems that the audience like the soybean films but had not, for example, found a previous film on hand washing to be worthy of keeping quiet for!”

The costs of screening

The cost of the screening element (excluding the film production cost) is around USD 75, This includes getting a driver to the village, setting up the screening and answering any questions the farmers have. This means, on average, that the cost of reaching an adult farming-family member is around USD 0.50 .

If we include the cost of making the film in addition to the screening costs, we are looking at a figure closer to USD 0.77, but this figure comes down significantly every time the films are reused.

The cost of media is only one part of cost effectiveness. We know from the focus groups that some changes are happening. Further exploration of the research data will explore impact on farmers’ knowledge, attitudes and practices.

Testing the rules for films

FAO‘s document, ‘A decision guide for rural advisory methods‘ provides some guidelines for the production and dissemination of films with farmers. We deviated from their guidance in several ways. First, our screening package was much longer than the 20 minutes recommended.  None of the films was more than 10 minutes but overall the package was between 50 minutes and an hour, depending on which elements we showed. We found that people really made an evening of it, watching the films and then asking questions. Often the events lasted several hours. The modular nature of the films also meant that one of our partners, IFDC, could use several of the films for a post-harvest campaign [].

All the films were in local languages, as recommended. In Ghana, this is complex as the table below shows:

One of the issues we had to address, was the diversity of languages spoken in Northern Ghana. By 2018 our films were translated in eight languages.  Our approach was to present all the films in the languages spoken in the area. The printed material was all produced in English.  This is because English is used to teach in secondary school, so anyone who can read, can read in English.

The ability of films screenings to reach audiences in villages has attracted the interest of policy makers in Ghana. The use of radio and televisions are known to be effective at sharing information at scale but, because of the proliferation of media channels, it increasingly difficult for broadcasters to be able to guarantee audiences for their shows.

Projects usually have to carry out surveys to get an estimate of the reach of their radio or television campaigns. Collecting monitoring data at village-based film screenings is a simple matter of carrying out a head count on the day.

We are anticipating that the approached used by GALA to share information about soybean farming in the north will soon be applied to the fight against fall armyworm in other parts of Ghana, as a result of the work of the National Learning Alliance, also led by CABI.

The GALA project is funded by the UK Department for International Development and supported through the Sustainable Agricultural Intensification Research and Learning in Africa (SAIRLA) program. GALA is one of the projects delivered by CABI under the Africa Soil Health Consortium program.