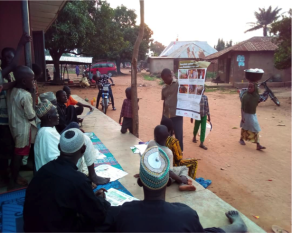 There is a growing interest and enthusiasm in the production of soybean among farmers in selected states in Nigeria as new yield-enhancing and soil fertility-improving technologies are being introduced to them through an integrated farmer education campaign.

The campaign is in line with the aim of ASHC to facilitate and support implementation of multi-partner and multi-media campaign-based approaches to improve the livelihoods of small-scale farming households through better access to practical information about Integrated Soil Fertility Management including promotion of the use of NODUMAX, (a rhizobium inoculant for soybean developed by IITA) and fertilizer application to improve soil fertility and increase smallholder farmers’ soybean yields.

Building on the experiences and lessons learnt from a pilot campaign that reached over 35,000 farmers in 2017, the 2018 campaign seeks to reach about 120,000 farmers in six priority soybean-producing states in Nigeria namely, Niger, Borno, Benue, Nasarawa, Kaduna and Kwara. 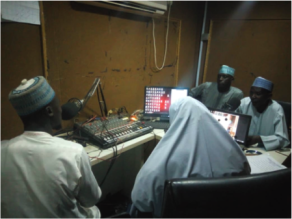 he campaign is designed to disseminate recommended soybean agronomic practices and technologies using three (3) channels namely prints (posters and flipcharts in English and relevant local languages), radio series and instructional videos deployed through field extension agents and agro-dealers. This multimedia approach was adopted in a unique manner to ensure the different tools and approaches used complement each other in a way that not only helps to increase famer reach but also reinforces messages for improved rate of adoption. 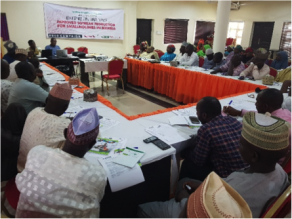 At a recent campaign review meeting with field implementation partners about six weeks into the campaign, it was revealed that there is growing enthusiasm among farmers about soybean production owing to the improved practices and technologies being introduced to them in the campaign messages through the trainings by the Extension Agents (EAs), radio broadcasts and videos.

Farmers in some Local Government Areas (LGAs) in Kaduna, for instance, indicated that they have in times past shied away from soybean production as a result of poor soil fertility and its attendant low yields and economic loses. However, with the introduction and explanation of how the inoculant (NoDumax) helps to improve soil fertility through nitrogen fixation from the atmosphere to boost yields, they have renewed interest in going back to soybean production.

Mabel Tsagbe, a female farmer who attended a training session in Gboko area of Benue state and received a poster had this to say: “We use to pull our soybean plant from the ground when harvesting not knowing that we were removing manure from the ground. We also use to spread our harvested soybean on the floor by the roadside to dry. Now that I have attended this training, together with my husband, we will be using knife to cut the stem of the plants when harvesting and also make a tarpaulin by sowing together many empty bags that we have for drying our soybean. No buyer will be able to refuse our soybeans again and they will pay us good price”

According to reports by some EAs in Nasarawa State, while some farmers who are already into soybean production are planning to expand their farm sizes as a result of the knowledge acquired through the campaign, other farmers who have, hitherto, not been in soybean farming are contemplating venturing into it as they see a lot of economic potentials in it compared to other crops. Also, some farmers see the knowledge acquired as an eye opener for them to diversify their farming ventures by including soybean to cushion them from economic losses experienced in the production of other crops such as maize and yam due to a variety of factors.

As at the middle of August, the campaign had been able to reach about 30,000 farmers through trainings and direct engagements between EAs and farmers while the weekly radio broadcasts on six radio stations are expected to be reaching far more numbers than the direct engagements. It expected that by the time the campaign ends in December 2018, it would have possibly reached more than the targeted 120,000 farmers and contributed significantly to bridging the existing yield gap in soybean production in Nigeria.