The Africa Soil Health Consortium (ASHC) has forged strategic partnerships with key private and public sector stakeholders to roll out an integrated farmer education campaign that is expected to lead to a significant boost in soybean production in nine (9) states in Nigeria. The campaign which is led in-country by Intrio Synergy Limited (ISL) with support from IITA, aims to increase soybean productivity through integrated soil fertility management in the states of Benue, Kwara, Niger, Kaduna, Kano, Borno, Kebbi, Sokoto and Federal Capital Territory (FCT) Abuja.

Soybean is one of the cheapest sources of protein for both human beings and livestock. The grain can be processed into several products such as soy-milk, cooking oil, infant weaning foods, kebabs and consumed as human food. This includes using it as an ingredient in the brewing industry. Moreover, the soybean cake is used in processing animal feed.

Soybean production remains low despite the many uses, due to various constraints. In Nigeria, the yield gap is estimated at about 70% with farmers realizing average yields of 0.8 metric tones per hectare (mt/ha) as compared to the potential yield of 2.7 mt/ha. The low productivity is attributed to poor application of proper agronomic practices in aspects of minimal use of good quality improved seed, proper field management and non-use of inoculants and fertilizers. 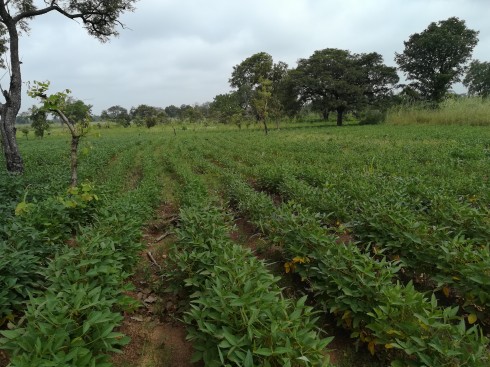 As a result of the above, IITA has developed and is producing an effective soybean inoculant, NoduMax whose proper application in addition to other recommended agronomic practices will lead to the realization of better soybean yields. This underscored the need for massive farmer education through an integrated scale-up campaign.

The ASHC/ISL campaign is combining different approaches in a complementary manner and leveraging mobile technology penetration to disseminate relevant messages to farmers in the soybean sector in Nigeria. The campaign is expected to reach an estimated 40,000 farmers with information through radio, print messages and mobile videos.

Started in July 2017 to run concurrently with the soybean season in Nigeria, the campaign has seen airing of radio jingles and six (6) 30-minutes broadcasts on inoculation and other relevant aspects of soybean agronomy on two radio stations. Posters and flipcharts were also produced and disseminated to agro-dealers and Extension Agents (AEs) in all the target states to assist them in educating soybean farmers within their networks. These messages are expected to be reinforced by videos on recommended practices for each stage of the soybean production cycle to be screened at community viewing centres and shared via social media platforms used by AEs and farmer groups. 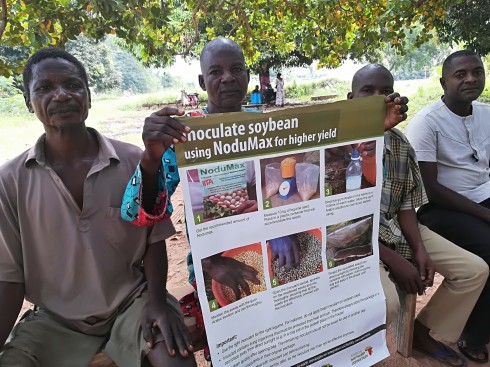 Interactions with some farmers in Aliade, a farming community near Makurdi, Benue State showed that the broadcasts on Harvest FM have helped them a great deal in improving their practices this season. In the words of one of the farmers, “what I heard on radio made me realize that inoculation was good but I was not getting the right results in my previous attempts because I wasn’t doing it right. This year, I followed the instructions as was given during the radio program and I have seen tremendous difference in the way my crops look and in the number of pods they developed”

The expected outcome of this campaign in the short-run is to improve farmers’ knowledge and skills on soybean production through use of improved seed, proper application of NoduMax inoculant, fertilizers, herbicides and field management practices. Given the crop’s potential to boost soil fertility, in the long run it is expected to have impact on soil fertility and contribute to the control of the parasitic weed Striga hermonthica.