13 July 2017: How ICT build farmer resilience through agricultural technologies… A CABI-led SMS campaign has been commended for its ability to provide farmers with timely information to enhance farmer resilience to challenges caused by climate change and pests and diseases. The campaign is carried out in the Southern Highlands of Tanzania as part of the UPTAKE project.

The campaign is promoting the adoption of high-yield crop varieties and complementary agricultural technologies amongst small-scale maize farmers.  In November 2016 when the activity began, the Agricultural Research Institute Uyole, a partner in the campaign,  issued an alert on delayed and reduced rainfall, based on forecasts received from the Meteorological Department.

Stephanie Gakuo, UPTAKE project manager at CABI, explains; “We had planned an SMS campaign targeting 40,000 maize farmers in the Southern Highland regions of Tanzania. We had prepared a set of messages alignedto the usual maize growing season, but we had to respond quickly to changing events. The delay and reduced rainfall meant we needed to change both the content and the timing of our messages to ensure they met the farmer’s needs.”

CABI promptly disseminated the weather information to warn the farmers. The timely sharing of this information supported the resilience of farmers to cope with the environmental challenges. New SMS messages were developed that encouraged the planting of short duration /fast maturing, drought tolerant and disease resistant maize varieties, that were available locally. The messages on good agronomic practices were also rescheduled to accommodate a six week delay in planting.

In March 2017 ARI Uyole raised a second alert. This time it was an outbreak of stalk borer. Once again information was promptly disseminated to maize farmers via SMS. 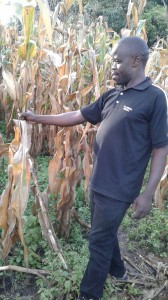 Stephanie continues: “The farmers were asked to inspect their fields for the pest and advisories were also given on appropriate measures to manage the problem. A number of farmers interviewed, report having inspected their fields, confirmed the invasion and urgently responded by spraying the recommended pesticides thereby saving potential loss of crop.”

Anthony Mwaisembo, a farmer in Njerenje Village, opines that receiving the SMS and responding to it saved him losses of at least 10 bags of maize of his anticipated 30 bag harvest.  With a bag of maize fetching 50,000 Tanzania shillings (he say’s the sms campaign saved him at least USD 300 – a sizeable amount of income from his two acre farm.

10 July 2017: Stephanie Gakuo, UPTAKE project manager reflects on the progress and emerging lessons from the project and the recent SMS campaigns. The full name of the UPTAKE project is Upscaling Agricultural Technologies through Knowledge and Extension. The agricultural technologies include a combination of the use of inputs that include  seed, fertilizer and pest and disease control technologies, along with the promotion […]

Stephanie Gakuo project manages the UPTAKE project developing ICT solutions support maize, potato and cassava farmers in Tanzania, she explains how the project is developing… We recently announced that UPTAKE will be sending over 1 million SMS’s to 41,000 maize farmers in the Southern Highlands of Tanzania. But this is only part of the story of how we are […]