16 February 2017 OFRA: The CABI team has been working closely with AGRA over the past few months to ensure that the lessons from OFRA are captured and shared.

Working with facilitator Dr Sileshi Gudeta Weldesemayat, the principle investigators from 12 of the participating countries have been developing journal papers utilizing the data collected with the support of the OFRA project.

At the end of the workshop: 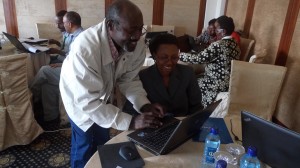 George Odour, deputy director of research at CABI, noted: ‘We held a very successful workshop at the end of 2016. During the event we were able to fully collate the crop yield and soil data from each of the countries and carry out an initial analysis of the data sets each country team had collected.

We had a target to identify 10 subjects for scientific papers.  In fact, such was the enthusiasm of the teams and the quality of the data sets they had, that 18 subject areas were selected.  These papers are on track to be submitted to journals by March 2017.’

Dr Francis Tetteh, from the OFRA team in Ghana,  said: ‘This training has come at the right time, some of us have been writing, but our papers were rejected or returned with comments that were so technical to us and we end up dumping them. However, with the skills we have gained here, we will work not only on OFRA data but also other data that has been pending.’

Table: Summary of journal papers being developed by the OFRA teams