Soybean and the gender agenda…

We recently asked our colleagues at N2Africa ‘is soybean a woman’s crop?’ Ken Giller reminded us that we could not make generalizations – and that we had to explore the context and location to know.

For the Ghanaian context Samuel Adjei-Nsiah came back with a great answer. He told us soybean was introduced in Ghana as far back as 1909. However it was never utilized in food preparations until recently, due to difficulty in processing it at the household level. Even now when it is being promoted as food crop, less than 5% of the crop is consumed at the household level. Recent interest in the cultivation of the crop by both men and women was mainly due to the availability of market. For women their interest lies in the fact that it could be produced easily with minimal external inputs.

This really helped us to put our thinking into context. N2Africa is working with the Africa Soil Health Consortium (ASHC) team will implement a soybean campaign in Northern Ghana and explore how different communication channels reach different gender groups and impact on their attitudes and behavior – with a specific interest in women and younger farmers. The work will be funded by Bill & Melinda Gates Foundation (ASHC) and UK Aid (Gender and the Legume Alliance). 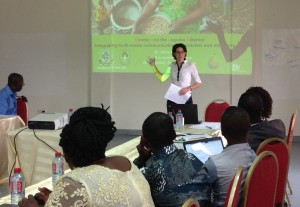 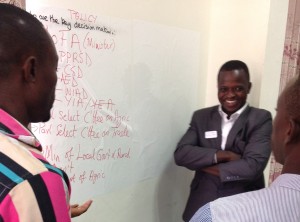 Photos from the GALA inception meeting in November 2016 in Tamale, Ghana organised with the help of the University of Development Studies

Although it is true that you can grow soybean without inputs, doing so you are likely to get very low yields. A few years ago, when the commodity prices for soybean in Ghana were relatively high, even modest yields gave good financial returns. But the shortage that led to the high prices of soybean in Ghana has long since abated, and prices have returned to their old levels (commodity prices for soybean around the world continue to fluctuate) However, during the past few years new technologies have become available that can support high yields in soybean.

The team at ASHC is looking at a scale-up campaign in Ghana that is promoting a basket to improve legume technologies: improved seed, P-rich fertilizer and especially the use of rhizobia or/inoculant. When these are coupled with good agronomic practices – such as careful seed handling, spacing and weeding, they produce good yields.

At the heart of the campaign will be 75 film screenings delivered by one of our media partners Countrywise Communications Ghana. The films will arrive in the villages on a converted motorbike and trailer. As dark descends the generator will fire up and a series of short films will set out everything you need to know about growing soybean. Audiences in 25 of the villages will be given short, cheap to produce, crib sheets of the key facts; audiences in the next 25 villages will be given a relatively expensive glossy poster and the final group will not get print and will have to rely on their memories. Another 21 extension meetings will be held in similar geographic locations, but with no use of films. The research will aim to quantify the effect of film and the added value of different print materials on attitudes and uptake of the technologies.

At the screenings, farming households will be asked to share their telephone contact details so that they can be followed up with SMS and voice messages and encouraged to purchase the inputs from their nearest agro-dealer.

The delivery team has spent the last few months consulting with partners on what we call a technology brief. This is a step-by-step guide to all that is important to know to successfully grow soybean.  It is worth pondering a moment on what we mean by successful – this has to mean economic viability and increased profit – not just increased production at any cost. Everyone involved in the project has been looking at the available data to be able to advise farmers about the benefit: cost ratios for the technologies that form the package. Growing soybean has another benefit to farmers – it will improve the nitrogen content of the soil that should improve soil fertility and boost subsequent crops such as maize.  So it is important that the benefit cost calculation reflects this too.

From the technology brief the team will refine a series of farmer-friendly messages in the form of film scripts and text for the posters and leaflets. During February our partners will be asked to validate the messages we have produced and to formally sign off the technology brief to confirm it covers best practice approaches. It is harder than it might appear to get a consensus on information that is easy for farmer to understand and work with.  Kwoa, the young Ghanaian designer we are working with on this project was very strict. He told us that he wants us to produce farmer materials that are less than one third text and where the images do all of the work. This is very different to how the scientific community usually shares information!

Interestingly the films used in the field will be in two languages Dagbani and Gonja, while the print will be in English only.  This is because the consensus of opinion is that if you are literate in Northern Ghana you can read English. And very few people read Dagbani or Gonja better than English!

In addition to the research on communication channels, a component of the GALA project led by IITA will look at building the capacity of agricultural input partners. The focus will be on better ways to forecast demand for legume inputs more accurately which will enable them to be better prepared to supply that demand. It is also looking at the importance of output markets, for this important cash crop. The team has been working closely with agricultural wholesalers Green Ef to ensure that agrodealers in the target areas will be able to respond to any demand stimulated by the campaign.

This blog was commissioned for the N2Africa Podcast and re-published here with their kind permission.