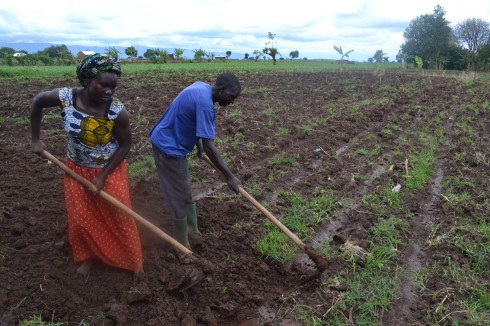 A multi-media campaign has helped CABI and partner agencies in Tanzania improve food security in Tanzania by encouraging thousands of farmers to adopt improved legume technologies including ways to produce healthier and more profitable crops of common bean and soybean.

Working in partnership with Farm Radio International, the Africa Fertilizer and Agribusiness Partnership and IITA/N2Africa, the consortium says more than 100,000 farmers are practicing one of the promoted legume technologies such as improved seed for common bean and a completely new inoculant seed treatment for soybean.

The Scaling-up Improved Legume Technologies (SILT) campaign was delivered in the Northern and Southern Highlands of Tanzania and, after an extensive research process, demonstrates that a collaborative multi-media campaign can work to change farming practices and improve food security.

James Watiti, Project Manager and Coordinator – Development, Communication and Extension at CABI, said, “The project set out in 2015 to explore whether working together on campaign-based communication and extension approach would make a significant contribution to our understanding of development communications for impact and scale.

“The campaign approach gave farmers the chance to understand their options, but also express their needs – representing an integrated, responsive and mutually beneficial framework for progress.

“We found that the more sources of information that reached a farming household, the more likely they are to implement new technologies.”

Karen Hampson, of Farm Radio International, added, “Our partnership with CABI and AFAP on the soybean programming in the Southern Highlands provided access to an estimated potential audience of over one million listeners and overall production of soybean increased through collaboration with the Clinton Foundation.

Dr Andrew Msolla, from Africa Fertilizer and Agribusiness Partnership, also noted, “This partnership taught us that reaching farmers through a variety of channels and offering them the chance to question and discuss the information was just half the picture. We learnt that in order to sustain the benefits, the national extension and input supply systems must operate in tune with the farmers and respond to their needs.”

The project also found that, through the distribution of more than 7,000 comics aimed at teenagers, that young people’s attitudes to agriculture are now more aspirational with the next generation wishing to adopt more ‘farm smart’ strategies to ensure future food security.

The Shujaaz comics – used as part of the SILT project – now form a new exhibition currently being run at the Karamel at College Arts Studio in London until 8 June 2018. Find out more as part of a blog on CABI’s ‘hand picked…and carefully sorted’ here: http://cabiblog.typepad.com/hand_picked/2018/05/showcasing-smart-agriculture-in-comic-exhibition.html#more