Family-centric cinema: a Q&A on changing the conversation for women in agriculture 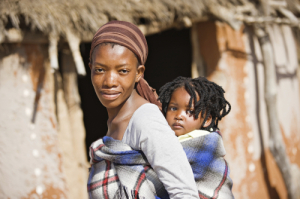 Women need first-hand information and knowledge about new agricultural technologies to have a say on how family farms are run, according to Dannie Romney, Global Director, Development, Communication and Extension, CABI.

Dannie is currently Project Executive for the Africa Soil Health Consortium (ASHC) and Gender and the Legume Alliance(GALA) projects working jointly in Ghana.

Understanding that families are a unit of production directs how the GALA project supports small-scale farming households to achieve sustainable legume intensification.

The project team recognise the gender issues involved and the constraints women may face in adopting a family-centric learning approach. The first step is to improve their access to information and knowledge on farming techniques.

Research by the UN Food and Agriculture Organisation highlighted the importance of including women in agricultural decision making. It estimated that if women were given the same access to productive resources as men, farm yields could increase by 20-30%, potentially reducing world hunger by 12-17%.

Although information is not the only barrier to participation, research by ASHC/GALA and others have shown that women source information on agricultural technologies in fewer ways than men and often rely on informal sources and other members of the household.

One of the key ways in which the project is getting the word out there is through village-based film screenings. Last year three tricycles carrying projectors, screens and generators visited almost 100 communities.

The 45 minute film informs those watching of the latest technologies and techniques in legume cultivation to increase yields and incomes. The screenings were lively events with question and answer session going on for a further 60-90 minutes.

An estimated 29,555 people attended these screenings. Of those attending, roughly 30% were women, 20% were men and the balance were school aged children.

A Q&A with Dannie explores these attendance figures and their potential for significantly affecting women’s participation in agricultural decision-making:

Q. Why were the screenings so successful at attracting women?

A. Before the screenings community animateurs from our partners Countrywise Communications Ghana went into the villages, spoke to the elders to understand how the village worked. The elders explained when people ate and when the last prayers were held at the mosque. These cultural differences were taken into account when deciding the best time to show the films.

This is one of the best options we have found for family based learning that encourages information sharing without disadvantaging women’s attendance. We have never consistently had more women attending demo plots, extension meetings or actively participating in the radio campaigns.

Q. What makes this format of learning ‘family-centric’?

A.This approach is allowing women access to information alongside men and children which we hope will change the dynamic of discussion and potentially decision making within the home. We don’t know if it’s working yet as the project doesn’t finish until next year but that is what we are very keen to explore. We have seen this happen in other parts of our communications work where we used Shujaaz comics to empower young people with information.

Q. Why was this approach more effective than others?

A. This isn’t a culture where a lot of things are written down, so everything learned needs to be remembered. Through the screenings we expect the quality of information adopted to be improved by sharing the responsibility for remembering.

People don’t talk about the quality of adoption enough. If thousands of people are trying to uptake a technology but they’re not doing it right because they forgot some key bit of information, they won’t see the benefits and they won’t do it again. We want to see high quality of adoption to give us good results which people will copy.

Q. How does this change women’s role in agricultural decision making at the domestic level?

A. Family centric learning starts with conversations with farming families about what they need to know. We then think of the farming family as the unit of production and present information where men and women’s roles are given equal credence. There may still be some challenges around traditional gender roles but the film provides the whole family with the information it needs. Therefore women are not disadvantaged by getting all their information second-hand.

We’re hoping to change the conversations women are able to have within the household to take greater ownership over the decisions made and how the farm budget is allocated. The films are attempting to contribute to the families memory bank on how these technologies work.

The final refinement we want to make is to break down how we present the information on the technology as step wise advice. By this we mean advice which is set out to ensure that we recognise packages of the technology that will have a good return on investment. Too often research findings are presented as a complete, but unaffordable, package. If we can help all farmers work out effective investment strategies for small investments in fertilizer and seed, we can slowly close the production gap and lift families out of poverty and into food security.

The 2018 soybean planting season starts in July. Ahead of the season an integrated campaign will be delivered by a network of partners  encompassing farmer field schools, demo plots, radio spots and discussions and village-based film screenings in Northern, Upper East and Upper West regions.