UPTAKE of cassava commercialization in Tz

13 June 2017: UPTAKE partner Farm Radio International (FRI) has produced a new briefing pack  for radio stations in Tanzania. It covers post-harvest processing of cassava including the production of chips, high quality cassava flour and starch. It sets out opportunities for greater commercialization of cassava, responding to new regulatory and commercial environment.

The Farm Radio International brief notes that wheat flour is more expensive than cassava flour in Tanzania, especially outside of Dar es Salaam where transport costs are also added . Therefore, wheat breads are being blended with up to 30 percent other flours. This is creating new opportunities, especially for farmers groups able to provide cassava at scale. Bakeries in Mtwara are now blending wheat flour with 10 percent cassava flour. Biscuit manufacturers and millers are also considering adding cassava flour.

ASHC and FRI have been working on a project called UPTAKE (Upscaling Technology in Agriculture Through Knowledge and Extension). This project is looking at how effective it is to have radio campaigns reinforced by SMS messages. The first round of radio programs and text messages concentrated on cassava agronomy.

Stephanie Gakuo, project manager at ASHC-UPTAKE explains: “The second echo campaign, aligned to the current cropping season, looks at more marketing issues. This campaign had 18 radio programs which concluded at the end of May 2017. The SMS component focuses on post-harvest activities including value addition and cassava processing. The SMS messages will  be greatly enriched by content contained in Farm Radio’s new briefing pack.” 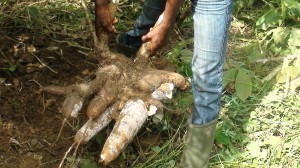 UPTAKE is also planning  to establish of an ICT referral system to support the production of  cassava planting material in Bagamoyo District. The demand for planting materials continues to outstrip the supply necessitating interventions to support the supply side to facilitate increased production.  A concept paper towards the establishment of the referral system is underway.  This aligns to the designation of cassava as the district’s priority crop.

Stephanie conclued: “Bagamoyo is going all out to increase production of the crop to contribute to food security and small-scale processing activities conducted through farmer groups, whose capacity in this area is being built with the support of Kibaha SRI, Sugarcane Research Institute.

It is important that projects like UPTAKE seek to increase production and productivity for crops where there is a strong and growing markets. In this case the new markets have the potential to reduce the need for expensive imported materials, which is good for the balance of trade in the country and potentially very good for the farmers in Tanzania.”