Update from the SILT MSc students in Tanzania

20 February 2017: Masso, Cargele, from IITA, updates us on the MSc research work happening in Tanzania:

It good to report that all of the SILT (Scaling-up Improved Legume Technologies) students are making strong progress with their research. I have reported before that four female candidates were among the top five best applicants This was great news given the relatively low percentage of female research scientists in the agricultural sector. It is worth repeating, as we have high hopes for all our scholars.

We have had to work within a limited budget to support get the support in place for the students. But a full-time research assistant has been appointed to support the students to maximize the research outputs of the project and to integrate the different research being undertaken.  Irene Mvena holds an MSc in agricultural economics and proving a valuable resource to the students and the SILT project and is really making a difference.

Two of the MSc students have started to collect data which will help to determine the cost effectiveness of different SILT campaign elements. Amina Mustapha has successfully completed survey of 373 household in Karatu (Babati district in Manyara region) in the Northern Highlands and she is currently working on data analysis. Charles Lugamara has completed around 300 household surveys in Mvomero and Gairo districts in Morogoro in the Eastern Highlands.  His analysis will start in early March 2017.

Ernesta Sanga, has pre-tested her household survey and she will roll it out in late February 2017. Data analysis will start by end of March 2017. Ernesta is exploring gender differences in access to information, awareness, and decision making and their impact on willingness to adopt ILT by women, men, and youth in Karatu district in the Northern highlands. Daphrose Nimbona will undertake a similar study in the Southern Highlands of Tanzania. Scolastica Gatty has completed her research proposal and will focus on cost-effectiveness among isolated and integrated extension dissemination methods in in raising awareness and stimulate uptake of integrated legume technologies in the Southern Highlands of Tanzania

Scolastica and Daphrose have had to retime their data collection plans.  We had wanted two rounds of students (early and late intake) to be able to apply some of the lessons learnt by the first group, but this would expose the second  group to heavy rains during the data collection and this would make logistic and the administration of questionnaires more difficult.  So, plans have been changed accordingly. 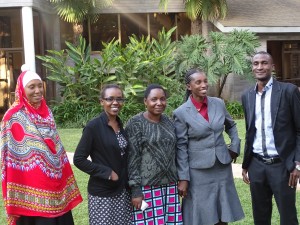 The students are very fortunate to be supported by many of my colleagues at IITA (four socio-scientists and two agronomists) as well as their host universities.  They are also part of the broader SILT family of Wageningen University, CABI, Farm Radio International, Africa Fertilizer Agribusiness Partnership, and development partners, which gives them great exposure and networking opportunities.

All this ground work means that we are on course for the submission of the theses by the five students by the end of 2017. Irene the research assistant is also working on the collection of complementary data which will also be shared and we anticipate two manuscripts will be drafted in the second half of 2017 for publication in suitable journals.

Summary of the students research approaches