15 March 2017: Daniel Lungo is a small-scale farmer who grows soybean in Utiga, a village in Njombe Region, in the Southern Highlands of Tanzania, where the weather is cold and the soil is sandy.

Mr Lungo, a father of five,  has been growing soya beans on his half-acre farm for the past three years. For him, 2016 was a very successful year. He managed to get a much better harvest than previous years. He says this was only possible with new techniques, like using fertilizer and an inoculant. Mr Lungo prepares his field for planting with oxen. Then he mixes his seed with an inoculant called LegumeFix, which contains rhizobia (bacteria), which improves nitrogen fixation.

Mr Lungo also uses DAP fertilizer during planting and after weeding to boost his yield, although he acknowledges that it’s expensive. He says, “We buy 50 kilograms of fertilizer for 60,000 Tanzanian shillings ($28 US). This is very expensive for a common farmer.”

Soybeans are leguminous crops that improve soil fertility by fixing nitrogen in the soil, Mr. Lungo says DAP fertilizers can help soybean farmers get better harvests. He explains, “Our area contains sandy soil that needs fertilizer. Without applying fertilizers during planting time and after weeding, we cannot get bumper harvests.”

While farmers only receive a small amount of subsidized fertilizer, Geoffrey Kirenga, chief executive  of Southern Agricultural Growth Corridor of Tanzania Centre Ltd (SAGCOT) says that the government’s program has had a side benefit: increasing farmers’ awareness of the need for fertilizer.

SAGCOT is a public-private partnership that aims to develop the area’s agricultural productivity and profitability. Mr Kirenga says, “More farmers are now aware of the need to use improved inputs, although the tonnage is still low.” He says the government’s subsidy program started in 2003, when farmers were using less than 100,000 metric tonnes of fertilizer a year. Fertilizer usage has tripled to 300,000 metric tonnes, but Mr Kirenga says this is still low. He adds, “More should be done, and that includes testing the soil to ensure we only use what is needed. It saves money and is also good for the soil and the environment.”

Frank Mwagike has been growing soybean in Wanging’ombe village for more than 15 years. When he started, he was not using improved seeds, fertilizers or insecticides. He used to grow for domestic consumption only, because there was no market for the crop.Now he is growing soybean on a three-quarter-acre plot and using inputs to increase his harvest. He applies fertilizer twice during the growing season: during planting and after weeding.

Mr Mwagike points to the support of Farm Input Promotions Africa in encouraging him to invest in soybean production and inputs such as fertilizer. This NGO supports farmer groups in Njombe Region. 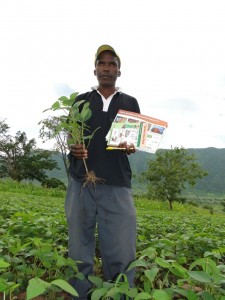 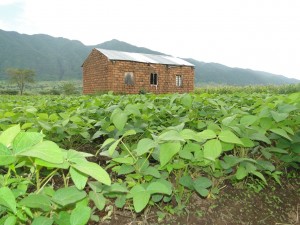 FIPS Africa QDS growers are supported with print materials, radio programs and the demos to build markets for improved seed varieties. QDS seed has to be sold within the ward it was grown.

Deo Msemwa is the operations manager of Farm Input Promotions Africa. He explains: “We provide farmers with agricultural inputs like quality declared quality seeds and fertilizer, among others.”

“Quality declared seeds” are seeds produced by farmers under the supervision of the Tanzania Official Seed Certification Institute, which declares them fit to be sold commercially. Mr Lungo is planting quality declared seeds of varieties that are high-yielding and resistant to disease.

Farmers in Njombe have seen the effects of climate change this year. Many farmers expected to plant in early January, but had to wait until February to plant because the rains had not arrived. ButWanging’ombe extension officer Issa Kimaro believes farmers can still get a good soybean harvest because inputs make the soybean plants healthier and more robust.

Mr Msemwa adds: “These inputs are necessary because they [make the crop] drought-tolerant and resistant to diseases, and we are sure that if farmers would properly apply them, they can get [a] bumper harvest, despite the challenges of climate change.”